There are three official positions in the wonderful world of human trafficking.

Can we really think that a girl or a woman decides voluntarily to become a prostitute?

In this blog, I will present you these three points of view and I will take advantage of it to position Talitha Koumi at the outset: We are firmly and resolutely abolitionist.

Not surprisingly, you will learn that this is the position taken by Thailand, a country whose fame in prostitution and pedophilia is unfortunately no 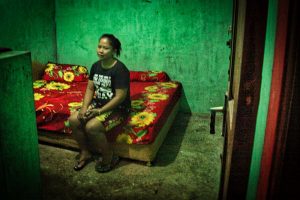 According to this position, prostitution must be considered as a viable alternative to poverty.

Prostitutes must therefore be considered as sex workers and protected from the abuses of traffickers, state and police authorities.

This is the point of view advocated by sex worker associations.

For the proponents of this position, we must consider prostitution as a form of work and not as a form of violence, the violence in question stemming rather from the criminalization of sex work, among others.

The goal is to enable prostitutes to <work> safely.

This is the point of view of Talitha Koumi.

We are abolitionists, which means that we view prostitution as a fundamental violation of human rights.

In no case will a woman get up one morning and decide that prostitution is a career choice. Rather, we believe that this stems from a lack of choice.

This is also what we saw during our report in Indonesia’s Indramayu district.

We make our own the words of the lawyer Ekberg (AQOCI, 2001): The constant demand for a new commodity dictates the trafficking of women … If men did not take for granted that they have the explicit right to buying and sexually exploiting women and girls, the sex trade would not exist (p.7).

The law of supply and demand: Ugly but true!

Talitha Koumi therefore advocates the criminalization of the abusers (customers, pimps as well as any person profiting from the activities of the prostitute) as well as the protection and the social reintegration of the victims (prostitutes).

Photojournalist and CEO of Talitha Koumi

Talitha Koumi is a leading player in the fight against sex trafficking of young girls in Indonesia.

Through photo reports, conferences and direct victim support, we are making a real difference in the lives of proven and potential victims of sex trafficking.

Your ticket for the: We are abolitionists.